This is in response to the Daily Post photo challenge on Adventure.

Trekking in the Himalayas is a complete adventure. But for me, the adrenalin rush is pronounced when I have to cross a glacier. When a trek route is being discussed and finalized, the first thing that I ask is “how much of snow will be there?” I am not bothered much about the altitude, having gone up to 19000 feet while going around Mount Kailash in Tibet. Snow conditions depend not just on altitude alone but also on the geographical location and the month of the year. But walking on ice is not a cakewalk (pun intended) for me.

The following 3 photographs were taken on my trek to Har ki dun, a beautiful valley at the base of swargarohini peak in Uttarakhand region of the Himalayas. We had taken a circuitous route which entailed crossing a series of glaciers on one day, most of them being on an incline of about 60-70 degrees requiring fixing of rope.

A few years later, on a trek to Indrahara Pass in the Dhauladhar range of the Himalayas, I opted to stay back at the last camp at the foot of the pass and 5 members of the group left at four in the morning to negotiate the steep (read scary) snow track , full of crevasses. You can see my good friends Arvind, Jaspal and the guides in the following photographs.   Hair-raising adventure indeed! 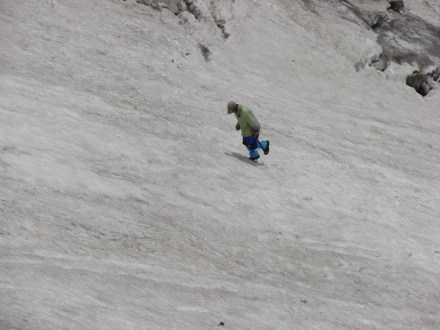 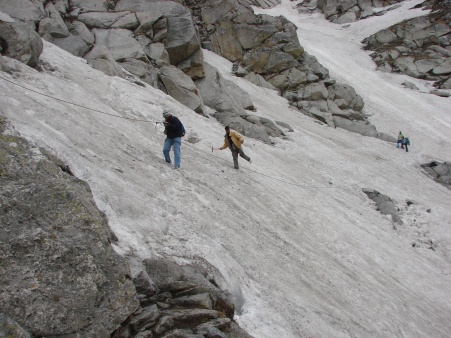 1 thought on “GLACIERS TO CROSS”