“Tiger Tiger” whispered the guide animatedly, the thrill and excitement in his voice not dimmed even after innumerable tiger sightings he must have had in the last 19 years that he has been in Bandhavgarh. The atmosphere electrified immediately and there was a palpable tension in the air. We were in the last leg of our last jeep ride in  Khitauli  area of Bandhavgarh Tiger Reserve when we spotted the tiger.

It was a full grown female cub and she and her sister had not yet left the mother to strike out on their own, informed the guide. The tiger, beautifully camouflaged in the sal tree forest, kept walking parallel to the dirt track on which our jeep was. The guide knew that it would soon come onto the road and cross it and so we stopped and waited.

And soon enough, the tiger emerged from the tree cover, strode majestically across the track with not even a glance bestowed on us.  The guide knew where it would exactly emerge again and swiftly we reversed and moved across the criss-cross of tracks and waited at a spot and were rewarded by another sighting of the same tiger.  This time, it walked on the track for a while, with our jeep following it slowly at a safe distance, before it entered the forest again.

Bandhavgarh Tiger Reserve in Madhya pradesh in central India is typical tiger country immortalized by Kipling and has a very high density of tigers.  The National Park is divided into 3 zones – Tala zone, magadhi zone and khitauli zone. We had spent 3 hours the previous evening in Tala zone, which is undoubtedly more beautiful than the other zones.

It has open grasslands, view of the Bandhavgarh fort which overlooks the forest, a place called “Sheshashaiya” – a huge idol of Lord Vishnu reclining on the seven hooded serpent Sheshnag with the spring waters emanating from near the feet. This zone is also dotted with several caves. Alighting from the jeep is allowed only at the biggest of these caves aptly titled “Badi Gufa” and at the Vishnu idol as the remaining caves are generally dwelling places of the tigers.

Though a rough and steep road goes right up to the 10th century fort, visits to the fort have been stopped for several years now. The fort complex has a temple with a priest in place, though it is difficult to imagine how he lives there alone in the wilderness as the fort area is known to be frequented by tigers. Once a year, on the day of Janmashtami – the birthday of Lord Krishna – people from the nearby villages are allowed to trek up to the temple and the tigers must be keeping away due to the presence of so many people.

In the Tala zone of the forest, we could see plenty of spotted deer, sambhar, peacocks and langurs. The throbbing wildlife was all around. 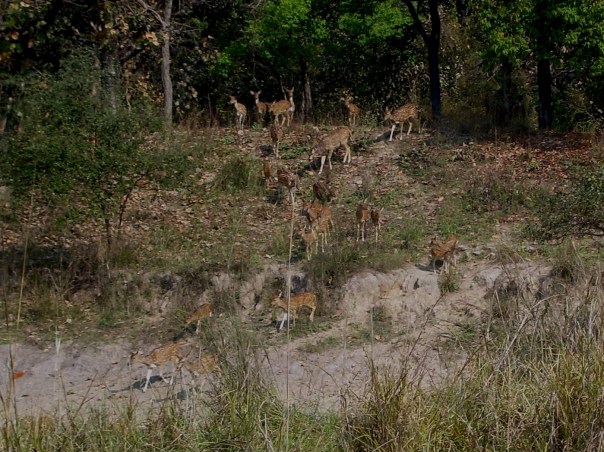 Twice we heard the alarm call of langurs, which unfailingly gives away the presence of the tiger, and waited for a while but we could not see the tiger. The ride through the forest was mesmerizing nevertheless.

Coming back to the tiger we saw, the thrill of seeing a tiger in the wild is unimaginable.  Though our hands were shaking, with excitement and fear in equal measure, we were able to take photographs and it ended all too soon.  Since we were on the last leg of the morning ride and moving towards the exit, we were busy recalling the tiger sighting we had, how magnificent she looked as she strode across the track when, all of a sudden, as we turned a bend in the road, we saw a tiger straight ahead and walking towards us.

There were a couple of vehicles behind the tiger and she (it was the mother we were told) must have emerged from the forest in front of them and walking away from them when we came bang in front of her. It was a heart stopping moment. There were frantic signals from those in the other jeeps asking us to back and allow the tiger to continue on its path. The driver of our jeep did comply but in the confusion and the hurry, he hit a rock and could not back any further.  I have never seen a tiger head on (we could see only the head and front legs – it was walking in perfect alignment) and the experience was bewitching to say the least.

She kept coming for a few more steps and then coolly changed course, and sauntered across to the other side of the road and into the forest cover.  Needless to say, none of us took any photographs of the front view and were galvanized into action only when she was about to enter the forest cover.

No regrets whatsoever. What is a photograph, when we could experience those moments that had us spellbound!

The forest department’s complex at Tala has several Forest Rest Houses and a very informative and well designed museum.  There is also an open amphitheatre and wildlife films are screened for the visitors. The film on “Charger” a very famous and aggressive male tiger who reigned over the Bandhavgarh forest for a long spell and “Sita” the tigress who was his mate and had produced several off springs, is worth watching.

Booking of the Forest Rest House is a bit of a pain (when will they make it simple and transparent?) and one can try several lodgings and resorts in Tala village right outside the Park gates.  The best time to visit the Park is March  – April as tiger sighting is almost certain.