We had a tiger sighting in zone 3 of Ranthambore National Park within the first hour on the first of the four safaris that we had booked. We counted ourselves as lucky and happily clicked photographs as the tigress Arrowhead walked past our canter, unhurried and unmindful of our presence. Arrowhead is one of the daughters of the tigress Krishna, who in turn is a daughter of the legendary tigress of Ranthambhore – Machli. As Arrowhead moved farther and farther away, we watched her contentedly while waiting for the canter to reverse and move on to other parts of the zone.

And suddenly, we saw stealth in her gait, trying to find cover behind the broken branches of the dead trees that were strewn around in that area. In an instant, many of us realized that she was stalking and were able to locate the object of her interest.

It was a wild boar, sitting alone in the middle of a marshy area, facing the other way and unaware of the predator closing upon him.  The atmosphere electrified as we realized that we were about to witness a tiger kill or at least an attempt to kill. The tigress did not waste time and charged. It was too late for the wild boar which started fleeing only at the last moment. The tigress reached the spot in two seconds, overshot and turned back with unimaginable speed and agility and pounced on the boar, holding it down and trying to choke its windpipe. We had a clear view despite the distance as the kill was made in an open area and we could see the boar struggling and the tigress also struggling to pin it down.

The tigress made no mistake of releasing its hold till all signs of life ended and this took almost ten minutes.

It is very difficult to describe what I experienced then. Awe certainly, amazement definitely. Sorry for the boar but great admiration for the tigress. Also a sense of gratitude and humility that we were allowed to witness something which establishes the law of nature.  The killing and what transpired subsequently were indeed the rarest of the rare events which one witnesses in Indian jungles.

We expected the tigress to carry her prey farther from us into the thick jungle on the other side. While the kill was witnessed by people in our canter and in two more jeeps, almost all the jeeps and canters that were in that zone congregated in that area as word must have spread around by then that there has not only been a tiger sighting but that there has been a tiger kill. The tigress got up, surveyed the area around her, picked up the lifeless boar and, to our amazement, started walking towards us. She clearly wanted to go back from where she had sauntered in, on the other side of where we were. 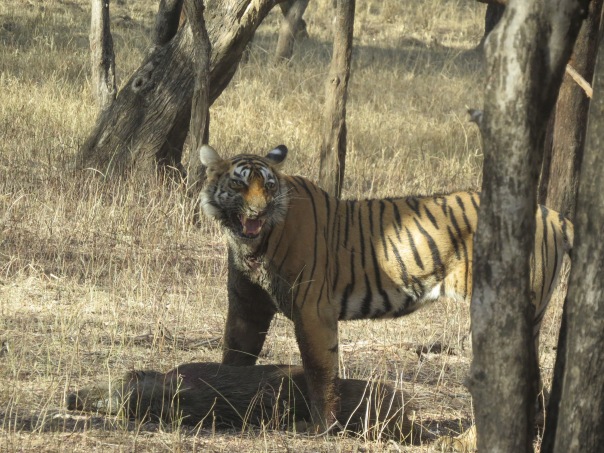 The boar was heavy and the tigress Arrowhead was tired after the exertion of the kill. Every time, she could walk barely a few steps before she had to put the boar down, picking it up again after a while.  At one point , she stumbled a little and at another, she took a short leap to clear some hurdle in her way. All the while, she kept coming closer and closer, but changed her direction several times which made the jeeps and canters to regroup to provide her sufficient gap for the cross over.  We had the closest view when she put the boar down again at the side of the track, between a jeep and a canter.

She picked it up again and made a dash across, tail up in the air in panic.

By then, all that we wanted was for her to cross the line of jeeps and reach her chosen space and feed on her kill in privacy.  Soon she was out of sight and we returned a subdued lot as what we had witnessed had impacted our senses in a strange way.

There are several national parks that can be visited over the weekend from Delhi but Ranthambhore National Park in Rajasthan should be on the top of your list. It is an overnight train journey to Sawai Madhopur, which is on the New Delhi – Mumbai rail route and is the town adjacent to the park. The theme “tiger” is present everywhere in the station(which incidentally is very well maintained and clean) – wall murals and paintings, metallic silhouttes of tiger on the station name board and on the facade of the building.

There are no forest rest houses inside or even adjacent to the park and all types of accommodation ranging from the luxury hotels to budget hotels to mid range ones are to be found only at Sawai Madhopur. So you can stop thinking about contacts in the forest department for booking a forest lodge, which you may be compelled to do for a visit to Jim Corbett National Park or Bandhavgarh National park or kanha National park.

For jeep and canter safaris, booking has to be done online, with photograph and identity proof,  not just for Ranthambore but for all the National Parks in Rajasthan. So, you must book your safari first before finalizing the plan to visit this park. The park is divided into 10 zones and a fixed number of jeeps and canters are allowed in the different zones. Zones 1 to 5 are the most popular as chances of tiger sighting are quite high here. Entry and exit of each vehicle is registered and the safari time is adhered to – 6.00 to 9.30 in the morning and 3 to 6.30 in the evening.

There is an impressive fort inside the forest with a temple, which is visited regularly by the local population.

The road from the main gate of the park to the fort is about 3 kilometers and you would come across people on bicycles, bikes and on foot too. Tigers have been spotted on or near this road, with no untoward incident.

There are several lakes and other water bodies inside the reserve.   The three famous lakes are Padam talao, Rajbagh talao and Malik talao. All three are beautiful in their own ways.  Padam talao is the largest and Jogi Mahal is located at its edge.

Jogi mahal has seen better times.  Originally a hunting lodge for the royals, it was converted into a forest rest house. A stay at Jogi mahal overlooking the lake Padam talao teeming with wildlife and birds must have been awesome. Sadly, it is closed to the public now and seems to be in a sorry state of disrepair.  Soon, it would be nothing but a ruin, devoured by the jungle.  One can spot wild boars, sambhar deer, spotted deer(chital), crocodiles and a wide variety of birds in and around these lakes. 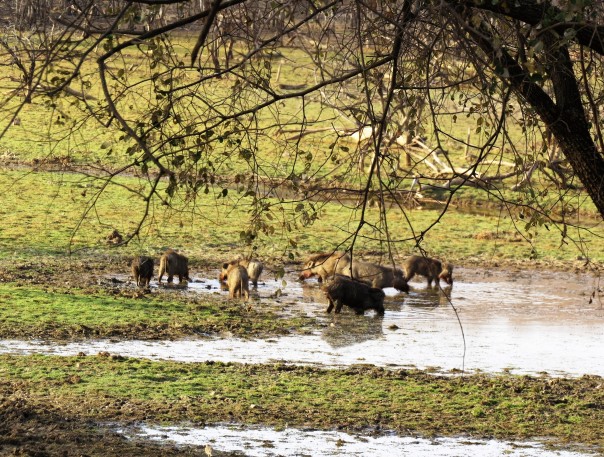 I end this piece with snapshots of the sisters Arrowhead and Lightning and the tigress Noor in different moods, captured during the other safaris.